The shelf life of a piece of handwriting (for the purposes of analysis) is unknown. Some people’s handwriting rarely changes during their adult life, and others alter dramatically.  Shifts will depend on personal circumstance and global evolution, because we’re all a part of the bigger picture.

Comparing these two samples of Boris’s handwriting (see below) – one was penned just days ago and the other was scribbled at the end of last year.  In spite of close dates, there are some distinct and interesting changes:

Boris has become more hands on, caring and involved. He’s still gung ho. But there’s more self-restraint, more caution, and frankly, more fear. He needs a team around him now more than ever, and in these days of self-isolation this irony is not lost on me.   How do I know all this?  Graphology geeks, step this way please for technical descriptions:

There has always been a concerted effort to keep people at arm’s length – Boris has always needed plenty of space to think, breath, and work his intellectual magic.  But now it’s clear he’s much more involved with what’s going on in the present.  He needs people closer to him, now more than ever, and during a time of social distancing this irony isn’t lost on me  (aerated – wide word and line spacing – then, much more compact with close word and line spacing now). He is still loquacious, but is now much more inclined to listen too (more disconnections/ unjoined up writing).  He has cultivated emotional warmth and become much more receptive to people’s feelings (pasty, rounded, fewer misplaced angles and more garlands), which means that although policy is still key, Boris is much more in tune with the heartbeat of humanity.

Things have become real, and all consuming.  Boris still excels at delegating, but now he’s much more hands-on, and keen to grasp a practical handle (small size, more emphasis on the middle/ lower zones). He’s still impatient with the details, but this means he can get to the root of problems swiftly, quickly cutting through irrelevance and deciding which issues are relevant and which aren’t, without wasting valuable time (simplified).  There’s more self-discipline and a desire for transparency and clarity (improved legibility, more regular/ less slapdash).

The rising baselines uncover an optimistic, upbeat attitude, but they are overly rising, which means there’s some over compensation going on.  In the words of Shakespeare:  “Methinks he doth protest too much!”  This is gutsy bravado – Boris is afraid.  And the really telling difference is the change in Boris’s left hand margin, which reveals how someone approaches the world.  A wide left hand margin is penned by someone who is opportunistic and keen to move away from what’s been, and embrace what’s to be.  But now it’s narrowing dramatically, which not only reveals Boris’s caution, but also uncovers serious doubts creeping in.  So any enthusiasm quickly dissipates.  That, and his continued sensitivity to criticism, colludes to keep him awake at night.

Boris is still his own man.  He continues to display the same flexibility and versatility, and he’s still likely to speak directly.  But he is now exercising more caution (more closed and squeezed ovals), which means he’s thinking things through. He’s less chaotic, improvising purposefully, with diligence, and a genuine lack of pretence (large arrogance arcades, simplification, diligence loop on ‘B’).  Boris is also still expedient, which means he’ll get the job done, by whatever means necessary.  Even if his job has completely changed from what we all imagined in the past month. 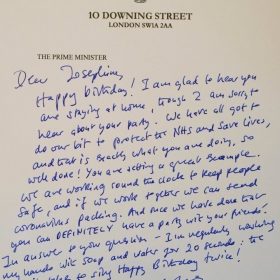 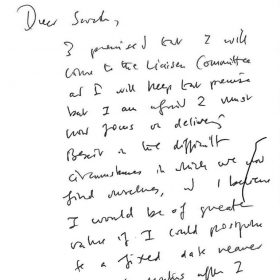