Michael Jackson’s handwritten notes in his ‘secret diary’ have today been published exclusively in the Daily Mirror. So it was a privilege to be invited to share some insights into his psyche.  Looking at three extracts (illustrations below), these are my thoughts from a graphological perspective:

The real value of these notes is that they were never intended for anyone else’s eyes, which means they were penned unselfconsciously and are 100% organic, offering candid insights into the mind of a man who believed he was omnipotent.  This unerring personal belief and unrestricted power is seen in clusters of handwriting movements:

He doesn’t bother writing on the lines (extract 1) – he writes straight across them, as if they aren’t there – which indicates that he was a law unto himself.  He wanted to stand out and be distinctive, and had no intention of doing things by the book. He was innovative and independent, making up his own rules as he went along. The size of the writing varies – the large size uncovering super-confidence, the smaller letters showing his ability to zoom in, concentrate and focus on applying the smaller details to his plans.  The exaggerated tall stems reveal his achievement-orientation, and illustrate how strongly he was motivated by grandiose schemes and creative fantasy, to the extent where he suffered from delusions of grandeur … and the sharp tips reveal his immense dissatisfaction (at an aspirational level).  MJ was visionary – reaching for the stars – but he was never content or fulfilled by his successes in life – he always wanted more.  And his strong sensual needs, his intense passions, unbridled excesses and dark fantasies are also seen in some of the thick, black smeary ink (in extract 3). He was obstinate and determined, he bottled up anger, and never really knew when to throw in the towel.  Erratic behaviour and rapid shifts in mood are seen in the mixed slant (extract 3), where the writing flip-flops backwards and forwards, and combined with pockets of right slant meant he had a propensity to push for extreme and immediate expression.

There are other tiny tell-tale clues in quirks of his handwriting:  The ‘th’ letter combinations (where the tiny letter ‘t’s are followed by the much taller letter ‘h’) uncover his intrepid desire for taking risks and his fearless love of adventure.  The large, Greek style ‘E’ (in extract 1) shows a desire for original expression.  The t-bars crossed high reveal how much he wanted to take charge and be in control of his own life.  The capital letter ‘M’ where the second hump is much taller than the first (particularly in extract 2), reveal his arrogance and strong need to be assertive.  This handwriting movement is particularly interesting because it also tells us that MJ was afraid of being ridiculed.  It reveals that he could be very awkward and rather unpleasant at unpredictable moments… and all because he secretly felt self-conscious.  The large personal pronoun I’s back-up his strong estimation of himself, highlighting conceited self-importance.

You can read more about this diary here > 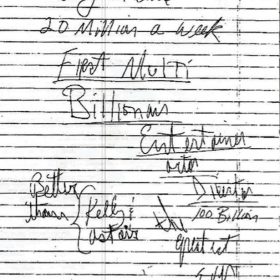 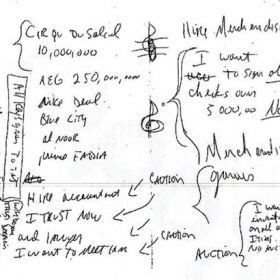 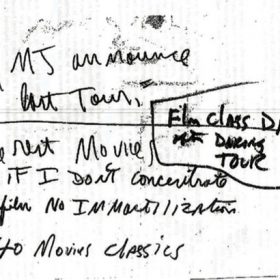